In several of the case studies in the literature, a shoulder injury related to vaccine administration (SIRVA) caused clear changes to the person’s bone marrow of the humeral head. It goes by several names and comes in different forms that you may hear from your doctor or on your MRI report:

When an MRI is taken very soon after the incident, it may not be apparent yet. In my case, I had an MRI at 1 month and a repeat MRI at 6 months. The radiologist didn’t catch it on the 1 month MRI because the changes were too subtle at that time, while the 6 month MRI showed it strongly and the radiologist went back and could see it on the first MRI and indicated that it had progressed. Also, the hint of a bone defect was observed on ultrasound about halfway between the two. Make sure you advocate for yourself to get a follow-up MRI to understand whether longer-term changes have taken place. I wasn’t originally going to get a second MRI, but I saw another doctor for another opinion and he ordered it.

While bone marrow edema is common in some parts of the body (like knees), it is rare in the humeral head and is usually associated with some kind of trauma: “Marrow edema in the greater tuberosity is an infrequent finding” (McCauley et al. 2000). It also shows up in conditions like rheumatoid arthritis, as edema or BMLs “constitute a central component of a wide variety of inflammatory and non-inflammatory rheumatologic conditions affecting the musculoskeletal system…[they are] considered significant sources of pain” (Eriksen 2015). It may also be caused by infection.

When there is no history of a blow to the shoulder or systemic arthritic condition, it seems to me like a clear smoking gun for SIRVA, and it shows up in many SIRVA cases (see below). Is there any good news about this? Maybe: “all findings are in line with the notion that BMLs represent repair phenomena, elicited by inflammatory or non-inflammatory trauma to the bone” (Eriksen 2015).

Once I found out I also had these classic bone damages from SIRVA, I started digging into the research and trying to understand what can be done about this particular component of SIRVA. Spoiler: I wish I knew the answer, but I’ll tell you what I have learned.

What can be done?

“Surgical debridement of the cystic areas and resurfacing of the humeral head yielded a good outcome. … The area of lateral humeral head osteolysis was treated with thorough debridement and irrigation. …. Bone grafting of the greater tuberosity was not undertaken because the defect would probably resolve with time following the initial debridement.” —Messerschmitt et al., Orthopedics 2012

“There isn’t really a good option surgically for inflammatory/immune mediated bone damage, microfracture can sometimes help but there is limited research on this that shows it to be effective.” –One of my doctors (by email)

“Surgical drilling of holes in the area of BML formation to relieve pressure was introduced as one of the earliest interventions to reduce pain and increase function in [osteoarthritis]…Core decompressions followed by injection of autologous bone marrow stem cells have been introduced for the treatment of osteonecrosis of the hip…and also intravenous administration of autologous and allogenic stem cells has been tried. Complications to these extensive procedures have been reported as minimal, but the results, however, vary” (Eriksen 2015).

“With an increased dosage of ibuprofen (2400 mg per day), the addition of peroral bisphosphonates (70 mg once a week), daily peroral calcium (1000 mg) and vitamin D3 (800 IU), and 6 weeks of manual therapy and massage (6 sessions per week), her resting pain completely remitted. … Pain on exertion subsequently declined within the next 6 months. The intake of all medication was ended in August 2010 (i.e., 9 months after onset). The last clinical examination, 11 months after vaccination, revealed an improved range of motion in the left shoulder ….  MRI scans 12 months after vaccination of the left shoulder showed a slight reduction of the necrosis area with signs of regeneration in the necrotic region. The patient experienced some pain after strong exertion in the arms, so she was advised to further reduce strenuous arm and shoulder activation and to avoid overhead activities.” —Kuether et al., Vaccine 2011

“Bisphosphonates reduce pain, extension of BMLs and improve functional outcomes in benign conditions like osteonecrosis, regional transient osteoporosis, enthesopathy in spondyloarthritis and regional pain syndromes. Most of the studies have been open label or interventional, but for osteonecrosis and regional pain syndrome significant effects have been demonstrated in randomised prospective trials. In several intervention studies, positive effects on pain have also been reported in local transient osteoporosis, stress fractures and various BML syndromes in athletes. One randomised placebo-controlled study on effects of the bisphosphonate Ibandronate on BMLs in the knee, did not, however, demonstrate significant effects” (Eriksen 2015).

“Bone stimulators might help this but it is something you would have to pay out of pocket for.” –One of my doctors

“In extracorporal shock wave therapy, a mechanical shock of defined magnitude is delivered to the area with BML. The technique has mainly been used for the treatment of plantar fasciitis, but effects on BML at the hip have also been reported with significant pain relief and functional improvement of the hip and reduction in BME. Proponents of this method claim that the mechanical shocks improve blood flow in the area, thereby reducing or alleviating BMLs. The shocks could, however, also increase microdamage in the area, which—if BML signifies bone repair—is counterintuitive” (Eriksen 2015).

One of my doctors saw a flyer for this and recommended it to me, as a provider had just opened up in my area: Osteostrong. It’s not cheap, but they start with at least one free session, so you can learn about their program. A well-known premise (from what I can tell) is that weight-bearing or loading of bones above and beyond the normal daily loading can reverse bad changes in bone density. You may be able to use this information to figure out your own way of applying a load onto the humerus, e.g., doing planks. I also tried biking, which puts a load onto outstretched arms.

What is the evidence that it happens due to SIRVA?

While spontaneous bone marrow edemas are rare in the shoulder (humerus bone), they are very common in SIRVA cases. For example, in Taylor and Hinke, 2014 (red arrow added by me to point out the bone edema, among the other things happening on this MRI):

Is one example not convincing enough? Here’s more, from Kuether et al., 2011. In this case, you’ll notice the image is the “opposite” in color, with the bone appearing light and the edema appearing as a menacing dark circle pointed out by a white arrow (which I didn’t add):

Back to the ones with dark bone and light color (“hyperintensity”) for the bone marrow edema, here is Okur et al., 2014, and I also didn’t add the red arrows this time although I highlighted in the caption: 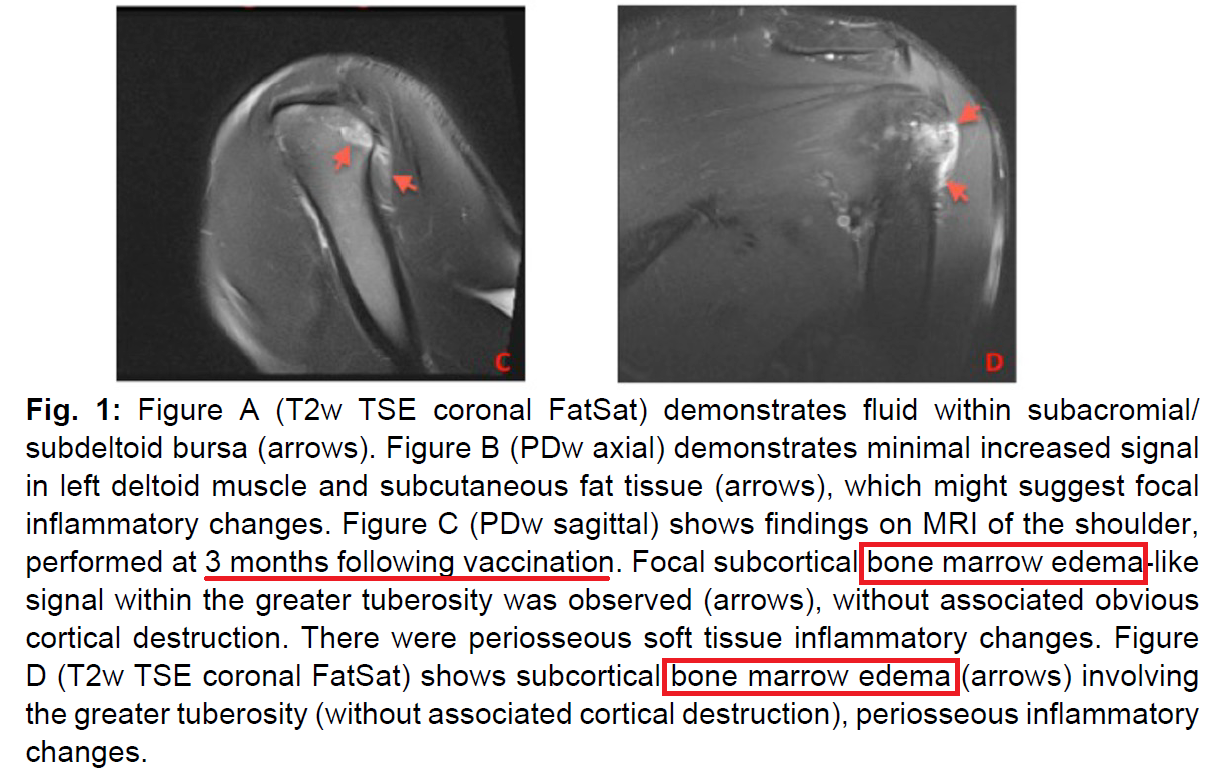 Need more convincing? How about another? This is from Salmon et al., 2015; red arrows mine, sorry if the caption is too small to read:

Back to my MRI, since we’re all now amateur radiologists: in each case below, the left MRI was taken at 1 month and the right one at 6 months. See the bright white edema in the bone, as in each of the examples above?

This is a slice through my shoulder horizontally, picture me laying on my back with my back to the bottom of the image. At one month the sign of edema is very small and subtle, but at 6 months it is raging:

Here is another, this one a slice vertically through the shoulder, closer to my back (“posterior”) than my front:

On each image, this is one slice further into my body than the previous one, i.e., one step closer towards my front (“anterior”):

If you’re curious about what the REAL radiologist said about this, the report reads:

The radiologist keeps bringing up a dislocation or direct blow injury to suggest alternatives to SIRVA, particularly because I didn’t mention the flu shot on the intake form for the MRI. But I can assure all of you that I didn’t have a direct blow injury to THIS shoulder, ever (the other shoulder is another story) and certainly NOT in between 1 and 6 months after the flu shot, which is when it blossoms from nearly nothing to something. So, direct blow injury or dislocation is not what happened. SIRVA happened, as I hope you can see from the evidence above.

Here are links to full journal articles the SIRVA cases where there is bone damage (some are pdfs; some are behind a paywall, but you get the idea):

What else is there to say?

When I found out about these bone marrow changes I was horrified about it. While alone at home I yelled, cried, raged. For some reason I could handle the “soft tissue” changes in stride, but knowing this improperly administered vaccine had damaged the very bone itself was more than I could bear. But the more I read, the more I learned that bone damage can be reversed. It’s not permanent either. Look at how broken bones can be healed stronger than ever before. It seems like the same is true for SIRVA-related bone damage, but time will tell for many of us.

4 thoughts on “Bone damage from SIRVA”